We're hoping for a snowy winter that's cold enough for good skiing, but not too cold! While we have a full complement of grooming equipment, we've run into a lot of Forest Service red tape and it doesn't look like we will be doing the grooming this season. The Forest Service does have limited grooming capabilities but is also getting caught in their own red tape. It appears that they will be able to do some grooming, but will mainly be focusing on other areas. As time permits they will try to get down to Laurel Mill and Brush Hollow.

On the north side we are only planning on grooming the Elk Loop. Due to the stairs on the Scout Loop it can't be groomed and the Lewis Run Bridge is not strong enough for the groomer to cross it. We may groom Scout Loop out to the Lewis Run Bridge. The Hemlock Loop has a number of issues with bridges, culverts, ruts and wet areas and will not be groomed this year. The Forest Service is planning on rerouting the Hemlock Loop in the fall of 2022. This reroute should eliminate the obstacles to grooming and eliminate the dreaded 'spillway hill'. So hopefully we will be able to groom more of the trails on the north side next season.

On the south side we plan to groom the Laurel Mill Trail, Perseverance Loop, and One Mile Loop. The Sparrow Nest Loop has never been groomed due to wet areas and bridges. The Forest Service has plans to widen the Sparrow Nest Loop and perhaps in the future we may be able to be groom it.

The Laurel Mill Trails present a challenge for grooming as they are narrow, hilly (in spots) and twisty. Most modern grooming equipment is designed for wide trails that cross open country and is not suited for use on narrow trails through the forest. The natural choice for narrow trails is a snowmobile, but most are not powerful enough to pull a tracksetter and the low speeds used for grooming can cause them to overheat. The Boot Jack Snow Gliders tried a number of different machines and in the end used a Bombardier Bombi. This machine had more than enough power to handle the tracksetter and the hills, but it was a tight fit on the trails. 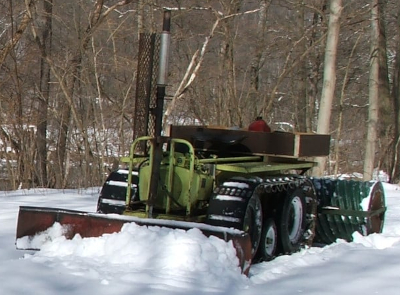 Unfortunately the Bombi isn't around anymore, but we've located a smaller machine that should be powerful enough to do the job. It's called a Ferret Tractor and they were in production from 1961 to 1993. We believe ours is 1969 model with an 18 horsepower engine. It has rubber tracks with steel grousers for traction. A blade on the front can break up ice crusts and push snow around to fill in ruts. Best of all it is 4 feet wide and only 8 feet long, a perfect fit for our trails.